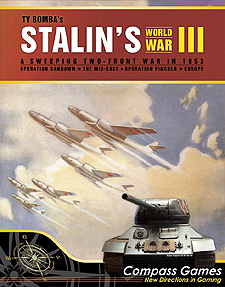 Stalin's World War III: Operation Pincher(The Soviet Offensive in Europe) and Operation Sandown (The Soviet Offensive in the Mid-East) is an alternative history monster-size wargame, designed by Ty Bomba. The game is intended to investigate the strategic parameters that would have been in place during the first 10 weeks of operations had Stalin lived long enough to put his plans in motion to start a global conflict in 1953. The most likely start date would have coincided with the signing of the Korean War armistice in July, in order to achieve maximum surprise. Each two-map game can be played separately by one, two, three, or four players, or they can both be combined into one Grand Campaign Scenario covering all four maps.

Full campaign games will cycle through various stages demonstrating several military doctrines. The Red Army juggernaut can drive deep into the relatively small US/UN/NATO ground forces, achieving spectacular early results. The use of US nuclear weapons may be all that prevents a loss for the US/UN/NATO player.

As Soviet losses mount, and US prestige sinks, the middle stage begins, characterised by considered manoeuvring by both sides, seeking to hold or take contestable key areas. Soviet airborne guard divisions are likely to make their appearance here. During this period, a well-planned Soviet campaign may achieve its victory objectives - the question is: can they hold onto them?

The end game sees an all-out UN counter offensive. That player throws in everything they've got to push back the Red Army from enough victory hexes to overturn what will otherwise be their end-of-play win on points.

For 2 to 4 players, this fast-paced, alternative history look at a possible World War III, initiated by Stalin, allows players to consider how such a war might have played out.