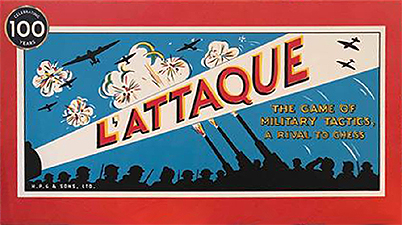 2019 marks the 100th anniversary of Gibsons, the family owned, jigsaw puzzle and games company founded on the 15th May 1919. Now in our fourth generation, we are proud of have such a rich heritage and our team are passionate about providing fun, family pastimes for all ages.

L'Attaque was the first of the "big four" military strategy-based games for Gibsons. Printed and manufactured from our premises in Aldergate Street, EC1 from the early 1920s until 1940, when the site was destroyed in the blitz.

A game for two people, L'Attaque is played on a 9x10 square board with 36 soldiers in each army representing both the French and the English. Players use strategy to attack on alternate moves with the aim of capturing their opponents' flag.

Marketed as a 'game to rival chess' copies are held in various museums, including the V&A in London. We have also included the original rules as a memento from this captivating and historic Gibsons game.