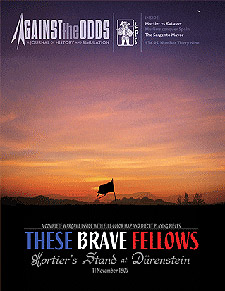 Against the Odds: These Brave Fellows

In the weeks before Austerlitz, French General Gazan's division, accompanied by Marshal Mortier, was boldly chasing Austrian stragglers out of Bavaria and going blindly into a Russian trap. The wily Marshal Kutusov outnumbered the French 4-1 in infantry and 20-1 in artillery... plus he knew where they were, and they were clueless about his position even as they marched into a valley he surrounded on three sides. Luckily for the French his men were exhausted starving, and freezing. That made things just about even.

After four hours of desperate fighting, Mortier's staff begged him to escape what looked like certain death or capture. Noting how well his troops had fought he answered:

"No! We must not separate from these brave fellows: we must be saved or perish together!"

Was he saving his reputation or preferring valour to wisdom? Whatever the answer, it worked. The French held, just barely, and the campaign would continue. Three weeks later, Napoleon would fight his "masterpiece" at Austerlitz, and Europe would see ten more years of war. But a different outcome at Durenstein - a place and a battle few have ever heard of - might have made a big difference.

Now, see how you might have changed things. The French are outnumbered and lacking in cavalry. The Russians are tired and hard to coordinate. Both sides face challenges and both sides can see the scales tip to glory or disaster.

These Brave Fellows' game mechanics cover the difficulties of coordinating attacks (and fighting in the snow), and variable arrival times of the Russian columns and supporting French. Optional rules allow players to explore the "what might have been" situations that were so close to happening; both sides had additional troops that could have been involved (or could have got there a lot sooner than they did).

Can you smash These Brave Fellows and save the Coalition? Can you do better than just grimly hold on and try to avoid telling the Emperor a sad story?