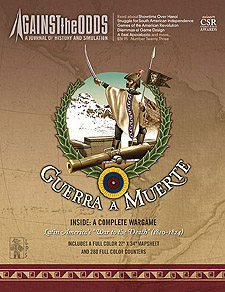 Against the Odds: Guerra A Muerte

The Napoleonic Wars brought enormous changes to the Wester Hemisphere. The Louisiana Purchase really started it, as Napoleon sold Jefferson a large block of land that really "belonged" to Spain. In shifting their forces to limit American expansion, the Spanish-loyal authorities opened the door to losing the remainder of two continents.

Guerra a Muerte depicts the 14 year struggle that saw Spain's possessions in the hemisphere shrink from "almost everything not US" to Cuba and Hispanola."

The game title mean "War to the Death," coming from Simon Bolivar's proclamation to Spaniards in Venezuela: Support us or else. Warfare ranged from the border of the US to the southern tip of South America. Progress ebbed and flowed with territories changing hands several times and the intensity and size of battles slowly escalating.

Guerra a Muerte offers a chance to understand a hardly-heard-of period of Western history, the effects of which are still with us today.