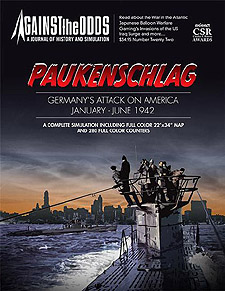 It was sort of like Pearl Harbor all over again, but deadlier. Twice as many Allied killed, 400 ships lost, while the authorities resisted both the proven convoy system and the common-sense approach of simply turning the lights out on coastal cities.

It could have been much worse. The Kriegsmarine started "Operation Drumroll" with just five submarines and were navigating with US tourist guide books. But, with US destroyers sitting in port, and merchant ships sailing with navigation lights burning, the Germans called it, "The Second Happy Time."

Paukenschlag covers Germany's attack on America, from January to June 1942, using the historical U-boat capabilities and optionally, adding the German long-range bombers which could have taken part. Key elements like radar, "Huffduff," and German "Milkcows," and a US carrier task force are included.