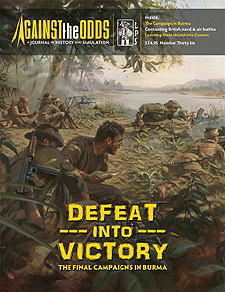 Against the Odds: Defeat into Victory

It was the theatre hardly anyone talked about then... or later. The lowest name on the "list" for supplies and troops. But success there changed the decades that followed World War II.

For much of 1943 and early 1944 the fighting in Burma was relegated to WWII's backwater by both sides. With the end of the monsoon season in early 1944 the strategic situation had changed Japanese fortunes had declined precipitously elsewhere, but determined to pre-empt any Allied attack out of India, the Japanese launched an offensive of their own in May, the largest they ever undertook outside of China. The battles that raged among the jungles and mountainous hillsides of the Indian and Burma frontier, and the subsequent Allied victory that followed in July, marked a fundamental and permanent shift in the war.

The Allied offensive in March 1945 was one marked by extensive planning and preparation, as well as bold and daring manoeuvres crushing the defending Imperial Japanese Burma Area Army.

Defeat into Victory covers this neglected aspect of WWII history using a very interactive and easy to play (chit-pull activation system) design. Rules cover supply (a crucial aspect in some of the most inhospitable terrain of the war) and combat, as well as morale and leadership, random events (that simulate the effects of battles and decisions by higher-ups elsewhere), weather, Japanese suicide tank attacks (human combat destruction squads), and changing war goals.

Scenarios include the initial Japanese 1944 springtime thrust into India, another on the 1945 Allied counteroffensive, as well as the Campaign Game. Tough decisions will have to be made by both sides as they allocate previous resources among their formations, determine their enemy's intentions and balance their plans, as well as attack and defend.