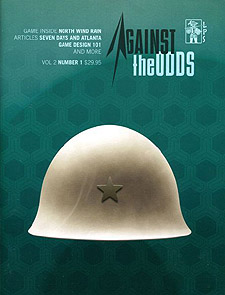 Against the Odds: North Wind Rain

North Wind Rain, the Japanese invasion of Manchuria, is an operational-strategic level game covering one of the great "what ifs" of the Second World War – a Japanese attack against the Soviet Far East. This attack, pitting the elite Japanese Kwantung Army against the full-strength divisions of the Soviet Far East Armies was not simply a hypothetical scenario, but one that the Japanese prepared for and seriously contemplated.

While neither the 1941 or 1942 campaigns simulated here were destined to be fought, the prospect was never far from the minds of either the Soviets or Japanese. As much history as possible was used in constructing these hypothetical scenarios. For the Japanese, it is assumed that the attack against the Western Allies in the Pacific still occurs; this explains why the Japanese Army and Army Air Force does not appear in the game. Only those Japanese assets already in Manchuria, in some cases northern China, or available in the home islands are considered. For the Soviets, facing the German onslaught in the west, only historical far Eastern forces are used.

North Wind Rain tests the myth that the Japanese could have easily moved into Manchuria, providing the last push to defeat the Soviet regime. The 1941 Soviet Far East garrison was a very strong force, in many cases containing better equipped and trained units than comparable formations stationed in the western USSR. Even in 1942, when the Soviet Far East garrison was at its weakest relative to the Kwantung Army, the massive Soviet mobilisation of its Asiatic resources maintained force levels. It is in 1942 that the Japanese have their best chance of success. The Kwantung Army, containing the cream of the Imperial Army, is intact, and has even been reinforced with large (by Japanese standards) armoured formations. Players now have the opportunity of deciding for themselves how feasible a Japanese attack really was.

North Wind Rain features two very different military systems. The Kwantung Army possesses a superior level of training and must use this advantage to press home their attacks, especially at night, to negate Soviet firepower. The Soviet player must use his superior armour and artillery to wear down the Japanese. The game system is relatively simple, while still reflecting the special capabilities of the different armies. By using their forces properly, players will be able to exploit the weaknesses of their opponents.