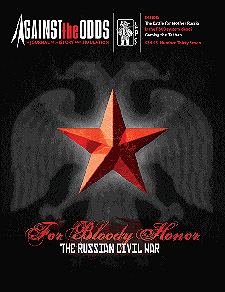 Against the Odds: For Bloody Honor

"Whites" versus "Reds" sounds clear. Reality was anything but.

It was a loose confederation of forces aligned against the Communist government, including land-owners, republicans, conservatives, middle-class citizens, reactionaries, pro-monarchists, liberals, army generals, non-Bolshevik socialists who still had their grievances, and democratic reformists. They were united only by their opposition to Bolshevik rule. And that was not enough.

On the other side, by the end, over 80% of the upper commanders in the Red Army were former Tasrist professionals.

Both sides used terror and conscription on peasants who only wanted to be left alone.

The war was bloody, prolonged, and the effects are still with us today.

Now you can explore the tangled facets of the Russian Civil War, with the historical situation exemplified by a game that handles two to four players...with up to three of them commanding the "White" Russian factions! (In multi-player games, if the Reds are defeated, the game isn’t over yet!)

For Bloody Honor: The Russian Civil War captures the interactions of political influence, railways, foreign intervention, and the discord among the White factions that gave the Bolsheviks their best chance to win in a battle against — as it seemed to them — their internal enemies and the whole Western Alliance.

Bonus Game Inside: Also included in this package is a small game on Operation Cerberus, the famous "Channel Dash" in Feb. 1942 in which major elements of the German Navy "dashed" from Brest to home waters, right through the English Channel under the noses of the Royal Navy. Dare trying it once more!