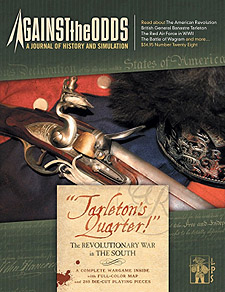 Against the Odds: Tarleton's Quarter

The British invasion of the South attempted to bring the four southern colonies - Georgia, North Carolina, South Carolina, and Virginia - back under British sway after almost four years of uninterrupted Continental control. They were relying on the appearance of a "silent majority" of loyal, but previously suppressed, American subjects.

"Tarleton's Quarter!" highlights some salient aspects of this campaign. First and foremost was the effect of leadership, and the difficulty both sides had in finding leaders who were bold without being rash. Rarely did energy and sound judgement come in the same package. Also key was the terrain of the southern colonies, or rather, one feature of it: water. Water, in the form of rivers and swamps, is the dominant feature as - surprise! - it rained a lot, particularly in the Carolinas. The diseases that haunted such a climate could be far deadlier than the enemy. Indulge then, in as much over-confidence as your red coat will allow...