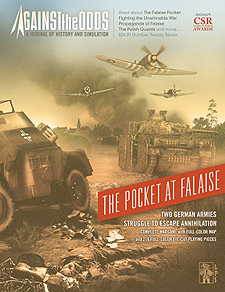 Against the Odds: The Pocket at Falaise

The road out of the Falaise Pocket... where 25 German divisions raced for survival, while the Allied armies aimed to turn Hitler's delayed counterattack on Normandy from failure to war-ending disaster. In one sense, neither side succeeded. But the devastation was something unprecedented.

At the point of contact, relatively weak units tried to "plug the leak" against overwhelming numbers of intensely motivated Germans. The "retreating" Germans are actually forced to do a lot of attacking, while the "advancing" allies found themselves in a desperate defense.

Award-winning designer The Pocket at Falaise uses a chit-pull activation system to capture this chaos. You must juggle to make the best out of an increasingly difficult situation. Solitaire rules for the game are included.

NOTE: an expansion for this game is included in Against the Odds 33: Meatgrinder (sold separately).