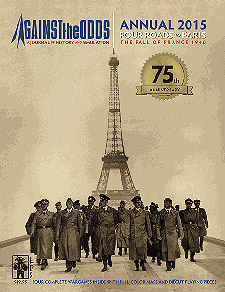 Against the Odds: Annual 2015 Four Roads to Paris

Why did France fall in 1040? Inside are FOUR complete games from four great designers, each with their own answer!

The Seeds of Disaster by John Prados goes deep into the roots of the conflict, examining how pre-war plans, on-going intelligence and counter-intelligence efforts, and foolishly projecting one's own motives on the enemy were the key factors in explaining what happened in 1940.

Springtime for Hitler by Michael Rinella explores the idea that the Germans at this time were really a superior army, possessing the best armour and tactical airforce, the best training and morale, the best plans and doctrine, and well motivated by ideology. Or were they?

Strange Victory by Steven Cunliffe A solitaire design that illustrates how just a few crack German divisions paralysed the Allied decision cycle to produce a catastrophic failure on the Allied side. But the German player's High Command can be the greater obstacle to conquer!

Betrayal! Roger Nord The most unusual of the games, where the two active players are Britain and France, nominally allies, compete against an aggressive game system controlling the Germans. Both players must cooperate to win, but also must position themselves to secure their national interests if France does fall.

Plus a big magazine full of in-depth articles covering the history behind the games - it's all inside this box.