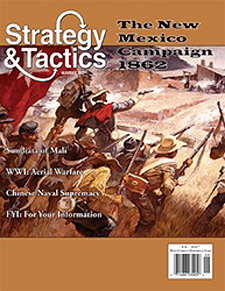 The Civil War in the Far West: The New Mexico Campaign, 1862 (NMC), is a two-player, low-to-intermediate complexity simulation of the Confederate invasion of the US southwest. It's primarily a strategic-level design, but it also contains operational undertones. The Confederate player is generally on the offensive, but the situation also calls for the Union player to make counterattacks.

Each hexagon on the map represents nine miles (14.6 kilometres) from side to opposite side. The units of manoeuvre for both sides are represented using a "strength point" system in which each point equals approximately 100 troops. Each artillery unit represents about six guns. Each game turn represents half a month. The game has been designed by Charles Diamond.

The Confederate combat units are illustrated with cavalry icons; those of the Union are shown as infantry. That was a broad compromise adopted due to the historic fact both "armies" engaged here - which, in reality, amounted to roughly a reinforced brigade on each side - are probably best described as combined-arms dragoon-and-foot combinations. Their unit compositions varied, as did their combat tactics, with the day-to-day availability of remounts and other supplies. Since the main sub-component of the Confederate force was known as Sibley's Cavalry Brigade, while the Union roster was primarily made up of infantry companies, we went with the icon presentation you see on the counters.

Artillery, supply wagons and depots are printed in Union blue on one side and in Confederate grey on their other. That's because those units may be captured during play and pressed into service in the army of the capturing side.