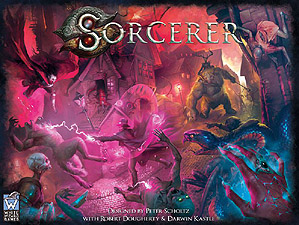 Welcome to a dark Victorian world where the fire and smoke of industry blacken the sky.

Here there is a border between two world; the worlds of reality and the unknown - a border which is slowly disintegrating, as faith in higher powers is pushed into the shadows by man's acceptance of technology. Across the border of the mortal realm lies Limbo: where dark gods, mythical monsters and fantastic creatures have been imprisoned or centuries.

But the sorcerers, the offspring of the dark gods and mortals, escaped the great purge. They wait for their opportunity to regain their former strength.

Now, as the border has all but completely dissolved and the two worlds collapse together, the sorcerers return to take their rightful place; their power far greater than any army.

Sorcerer is a 2-4 player dark fantasy game from the creators of Star Realms. It combines the best elements of a strategy card game and a tactical board game to create a whole new play experience!

Each game you will create a unique sorcerer by combining a Character Deck, A Lineage Deck, and a Domain Deck. Shuffle them together to form your Grimoire (which contains your dark magic and evil minions) and you are ready to play!

Each deck also comes with a skill card. Together, they show your true name. For example you might be Ariaspes the Demonologist of the Outcast Sanctuary.

There are three different battlefields in the game representing different sections of Victorian London. When you play a minion, you must decide which battlefield to put it into. It may only attack and use its abilities in that battlefield. If you later decide you need it elsewhere, you may spend an action to move it to a neighbouring battlefield.

After all player actions have been spent, minions do battle, rolling battle dice equal to their attack, damaging or destroying enemy minions, or even capturing the battlefield itself. If you capture 2 of the 3 battlefields, you win the game!