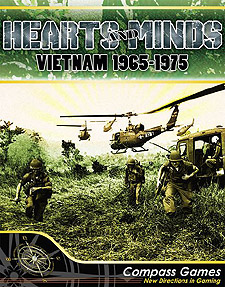 Hearts and Minds offers a unique approach to one of the most controversial conflicts in the post-World War era.

From 1964 through 1975 The United States fought to prevent a communist takeover of South Vietnam. By 1967 one half million American troops were stationed in Southeast Asia. The war expanded into Laos and Cambodia. Facing an elusive, invisible enemy, controversial bombing campaigns, mounting military casualties and civilian deaths, the American public responded with massive protests for and against the war. The 1968 communist Tet Offensive turned into a stunning allied victory but an unexpected media disaster. By 1973 the U.S. had pulled its troops from Vietnam but continued to support the South Vietnamese until their collapse in 1975. The war resulted in 58,220 U.S. dead and well over a million Vietnamese soldiers and civilians.

The Hearts and Minds (HAM) design offers a unique card-driven, area-movement approach with tremendous re-playability. Players explore the military and the political aspects of the war. Easy to learn, quick to play, HAM allows players to play any one year or series of years. Players are engrossed in the language and events of the era, from the Ho-Chi-Minh Trail, Hidden VC units, concentrated bombing missions, rapid deployment forces, South Vietnamese Coups and the promotion of green survivors into tough veteran troops.

Hearts and Minds was intruded in 2010 and has since undergone numerous upgrades. This third version offers the finest components yet, along with new solitaire capability.