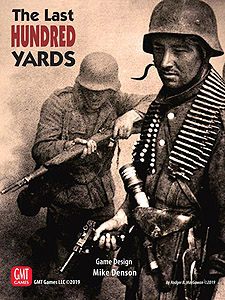 The Last Hundred Yards introduces innovative systems intended to model Small Unit Behavior in Combat during WW2. It is fun, fast-paced, and provides a very good simulation of what it was like to command combat units at the platoon or company level. The game is purposely designed to force many decisions upon you as you command an infantry platoon, or company in Western Europe.

Initiative and Advantage: In The Last Hundred Yards, only the player winning the initiative has a proactive game turn His opponent is limited to reaction only. Generally, the attacker has the initiative or momentum at the beginning of a small unit combat as the result of plans and preparation, so the attacking force dictates the action. The defender will generally react to the attacker's actions, hoping at some point to blunt or take away the attacker's momentum. This is represented in The Last Hundred Yards by player advantage and the importance of winning the initiative.

Simultaneous vs Sequential: In small unit combat, things are happening simultaneously. In an attack on an enemy position, some units of a formation provide cover fire to suppress the enemy, while other units manoeuvre against the enemy position. These actions take place simultaneously. The more firepower the attacker can bring to bear is crucial to success. Each player's units would be moving and firing simultaneously and may not know or see where the enemy manoeuvred. In The Last Hundred Yards, simultaneous movement and opportunity fire are modelled primarily through the Action/Reaction Cycle and Fire Mechanics.

Winning the Game: In each mission or operations, an attacking player must achieve a specific objective. Once accomplished, the attacking player's score is based on the time required to complete the missions, additional mission objective points, and the casualty differential between the sides. Based on the final score, the attacker will either win, lose, or draw.

Simplicity of Rules: Any veteran wargamer will appreciate the brevity of the rules, and the elegance of the game systems. The designer has created a relatively short set of rules, using simple, but innovative solutions to capture the concepts of tactical wargaming well. As a result, The Last Hundred Yards is a fairly simple game to play, although it is challenging to master.