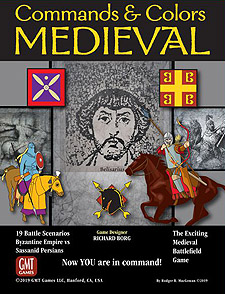 The Commands & Colors: Medieval game allows players to recreate important engagements of early medieval history. The scale of the game is flexible and varies from battle to battle. For some scenarios, a unit may represent a Byzantine infantry or cavalry Banda of soldiers, while in other scenarios a unit may represent just a few brave Warriors. Still, the battlefield tactics you will need to execute to gain victory conform remarkably well to the strengths and limitations of the various medieval unit types, their weapons, the terrain, and history. Commands & Colors: Medieval is based on the highly successful Commands & Colors game system and by design it is not overly complex.

In this core game, the focus is on early medieval battles between the Byzantine Empire and Sassanid Persians (528-586). In addition, some key battles between the Huns and Romans are included, which act nicely as a bridge between C&C: Ancients and the early medieval period, as well as a gateway into the rest of the medieval core game scenarios. The Byzantine army during this period of medieval history tended to mirror its eastern adversaries by deploying an increasing number of super heavy cataphracted armoured cavalry formations and more missile troops. Yet, it was how the Byzantines adapted thier battlefield tactics in relation to the enemy they faced that is perhaps the chief reason for the longevity of the empire.