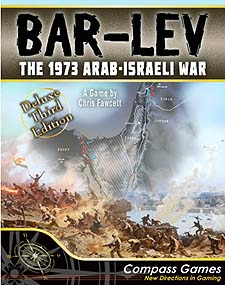 Bar-Lev: The 1973 Arab-Israeli War, Deluxe Edition, is an operational level game of the 1973 Arab-Israeli War, known as the Yom Kippur War to the Israelis, and the Ramadan War to the Arabs. Either of the two fronts - the Golan Heights and the Suez Canal - may be gamed separately, or both can be linked to replay the entire war...except that YOU are in command. Operational planning is up to the players - YOU decide who to mobilise and where the hammer blow is to fall. A great game for 2-5 players but also playable solitaire!

Bar-Lev: The 1973 Arab-Israeli War, represents an all-new game treatment of both the Conflict Games Company and Game Designers Workshop releases initially published in 1973 and 1977, updated and refreshed. This deluxe edition of the classic Frank Chadwick game goes beyond a mere reprint of the original game. It features a revised order of battle, redrawn maps, and completely rewritten rules that fully integrate ground, air and air defense systems into a cohesive whole. The new sequence of play provides deeply immersive experience for players.