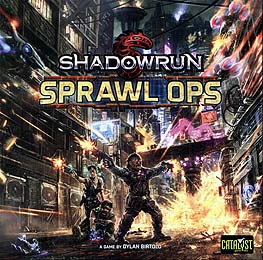 In the year 2079, shadowrunners do the jobs no one else wants. MAybe they're hired to steal a new laser prototype from a top-tier tech corp. Maybe they have to extract and ork middle manager from a dead-end job where the higher-ups treat her like something they accidentally stepped on. Or maybe they're trying to keep a powerful politician alive, one that's been targeted for assassination by another team in the shadows. There's plenty of work to do, and plenty of obstacles to overcome. Backstabbing corporate pawns, aggressive law enforcement, and other shadowrunners angling for your payday can get in your way. Your job is to beat them to the punch and make the big scvore before they can stop you.

Shadowrun: Sprawl Ops puts players in control of their own team of shadowrunners, selecting who they'll hire, and then building up the cash, gear, and abilities the runners need to survive the streets. You'll need to shape them into an efficient, deadly team, because they'll be pitted against other runners in a race to the top. Only one team will complete the final mission that scores a huge payday and wins the game. Do you have the guts, wiles, and treachery it takes to make it to the top? Time to find out.