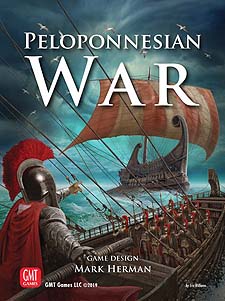 What was old is new again. Peloponnesian War was originally published by Victory Games. This enhanced version of a unique solitaire design that was a pioneer in this genre. The new version features an entire graphic makeover with new scenarios for both solitaire and two-player.

Most current solitaire systems today have the player take one side for the entire game. This pits the player against a random Solitaire system, even the best of which have some difficulty giving you the same challenge as playing against a human opponent. In Peloponnesian War, you get to play both sides, pitting yourself against the best that YOU can offer. If the game system is winning, the player is forced to continue with the losing side. Success, on the other hand, will eventually force the player to change sides and recover the losing side's fortunes. The duration of the war and the player's performance determine victory. In this manner the player competes against himself in the classic tradition of the Greek tragedy.

The main scenario covers the entire 2nd Peloponnesian War as chronicled by the Greek historian Thucydidies. It covers the war from its opening decade known as the Archidamian War in 431BC to the Fall of Athens in 404BC, Peloponnesian War allows YOU to compete against the man in the mirror as you live through the suicide of Greece. Manoeuvre your generals, hoplites, and navies to fight battles and attempt to bring the war to an end on your terms. Take heed, however. As you weaken your foe, you create a greater game challenge for yourself. For as you improve in strength, so does your opponent.

This new version of Peloponnesian War comes with two new scenarios. In Thucydides he relates an earlier conflict, known as the 1st Peloponnesian War which is now included with a new random events table and conditions appropriate to that eariler, shorter conflict. This scenario will give you a perspective on how events led up to the epic final encounter between Athens and Sparta.

As a bonus, the new two player Fall of Sparta scenario allows you to experience the events after Athens surrendered in 404BC. This allows Peloponnesian War to tell the history from 460 to 362BC for the first time in one game system. Now you get to find out how Sparta as the new hegemon of Greece managed to squander its victory, leading to the rise of Thebes. This new narrative introduces independent Persian and Theban forces and reimplements the solitaire system to show the shifting alliances that confronted Sparta as her short period of expansion led to her surprising downfall.

Peloponnesian War brings the full story of 5th and 4th century Greece to your gaming table in a unique solitaire system that was a pioneer in this genre. Can you prevail against yourself? Can you prevent the Fall of Sparta? If these questions interest you, Peloponnesian War awaits.