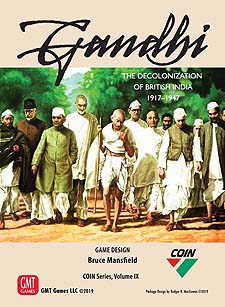 India: The Jewel in the Crown of the British Empire

1917 The British Empire was one of the largest and most powerful empires in history. At the centre of the empire was India, one of the world's great classical civilisations. British rule over India seemed absolute, unchallenged since the defeat of the 1857 Rebellion. Yet only three decades later the mightiest empire in the world would be humbled, and India would become a free nation. It was not armed conflict that freed India, but Gandhi's radical doctrine of nonviolent resistance. Gandhi gave Indians an effective method to disrupt the oppression of colonialism. Nonviolence challenged the legitimacy of British rule, and proved the futility of repressing a nationwide movement with military force.

VOLUME IX in the COIN series gives 1 to 4 players the opportunity to steer the history of India. The British Raj seek to retain their control over India by maintaining the support of the populace, without which the empire cannot stand. Gandhi and the Indian National Congress plan to break the Raj hold on India through widespread opposition to British rule. The Muslim League is torn between supporting their Congress allies and establishing an independent state for Muslim Indians. And the Revolutionaries have rejected nonviolence entirely, adopting the classic tools of insurgency to sow unrest across India: violence and terror.

Gandhi weaves together historical, political, and cultural threads and offers an opportunity to study nonviolent and violent ressitance as the age of European imperialism begins to unravel. Gandhi adopts the same card-assisted system of earlier COIN volumes to the unique features of nonviolent resistance. Solitaire players can test their skill against an innovative new system. With short and long scenarios to fit any play time, Gandhi is a thorough exploration of the nonviolence movement in India. Hind Swaraj!

"I object to violence because, when it appears to do good, the good is only temporary, the evil it does is permanent." - Mohandas Gandhi, Young India (21 May 1925)