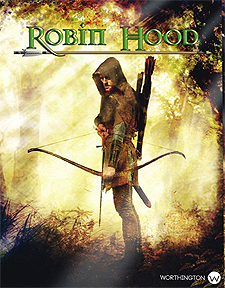 Medieval England has many Legends and Myths. One of the most enduring of English folklore is Robin Hood, legendary Outlaw archer and champion of the common people.

Robin Hood is our two-player game that brings all the action of Medieval England into play. It uniquely blends traditional Medieval soldiers like Knights, Pikemen, Archers, etc. in movement and battle with role-playing characters from the Robin Hood saga.

Robin of Loxley, a nobleman by birth, returns home from the crusades and finds his lands taken and people over-taxed by the Sheriff of Nottingham and his enforcer, the Black Knight. Confronting the injustices and tyranny, he chooses to become an outlaw and leader of the common folks. Robbing from the Sheriff and giving to the poor, he becomes a hero and legend as the contest between good and evil unfolds in the Castles and villages of Nottingham and the deep woods of Sherwood Forest.