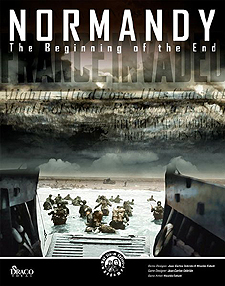 Normandy: The Beginning of the End

On June 8, 1944, more than 160,000 Allied troops landed along a 50-mile stretch of heavily-fortified French coastline to fight Germany on the beaches of Normandy, France. General Dwight D. Eisenhower called the operation a crusade in which, "we will accept nothing less than full victory."

The War Storm Series is a game series, designed to simulate combined arms platoon level combat. Units represent groups of between 30 and 40 soldiers and Transports groups of 3 to 5 vehicles and their corresponding crews. Each map hex represents a distance of approximately 150 to 200 meters and each turn about 12-15 minutes of action. The included scenarios cover the engagements of the first months following the landings.

The game system is based on the principle of simultaneous execution, or simply "WE GO", a hybrid system of turns and "real time". It also includes a scenario-point system generation too!

Normandy, The Beginning of the End is a tactical wargame with a set of rules that reduces the learning curve. The system's emphasis is on command and leadership, with officers being the main focus of the game.

Land on the bloody shores of Omaha; fight on the outskirts of Saint-Lo; seize the Fortress Europe and dive into the most important engagements between the German and US armies

Command Easy Company, 506th PIR, the night before the landings. Or defend the Atlantikwall with your SS troops. Prove to the Allies why the Tiger tank is feared all across Europe.

Whatever side you choose, Normandy, the Beginning of the End will challenge your tactical abilities in the chaos of battle.

Rewrite the events that triggered the end of the largest armed conflict in History!