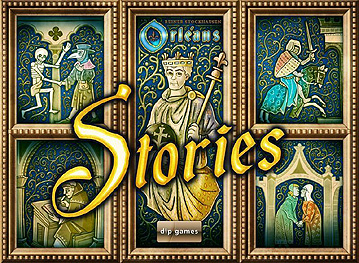 Bienvenue to the new, old world in and around Orleans. Orleans Stories leads you through different eras where various events await you. What's unusual about Orleans Stories is that conditions and rules can change during the course of the game. Depending on the era you are in, some of them can be different - e.g., differing Fame points for Building actions or varying numbers of followers you are allowed to draw.

In "The First Kingdom" you will experience a thrilling story as settlers in the region of the Loire river. On your way through the 8 eras where you can stay as long as you like, you will expand your realm, conquer other territories, cultivate and produce, establish villages, and build fortresses and churches. You will go through times of wealth and success, but also periods full of privation, and have to withstand hunger and plague. You will fight for your country and might have to conquer foreign areas in order to secure your settlers' lives. In the end, however, you can make peace and administer areas and villages together, which helps you achieve further growth quickly. In all this, you must never lose sight of the bit picture. The first one to accomplish the given goals will be crowned the first king in Orleans.

The 2nd Story, "The King's Favour" is a highly interactive game in which players stride together through each of the five eras. In each era, you have no more than four rounds to fulfil the given tasks. And these tasks become more and more difficult from one era to the next. If you fail, you have only one chance to plead for mercy; after that, the game would end for you. If several players reach the final era and have fulfilled all tasks, the number of victory points that can be gained in various ways decides who will win the king's favour.