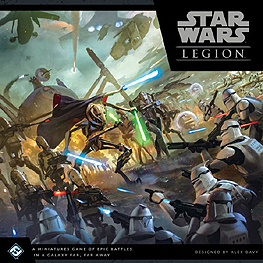 THERE IS UNREST IN THE GALACTIC SENATE...

The Separatist Alliance poses a threat to peace in the galaxy, wielding a massive droid military with overwhelming numbers. Standing against them are the clone troopers of the Galactic Republic, who are trained as soldiers from their conception and are deeply loyal to their cause. The war between them is an epic struggle in which every battle could turn the tide and change the fate of the galaxy...

Experience the legendary ground battles of Star Wars! Command your forces as they clash in epic encounters with the STAR WARS: LEGION miniatures game. Each miniature is finely detailed to bring to life the heroes, villains, soldiers, and vehicles of the Star Wars galaxy.