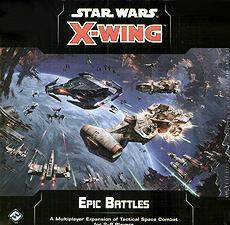 Fly your favourite squads with a single dial! With the new wing tools, players can mobilize groups of starfighters as wings: tight formation that stick together as they manoeuvre.

Battle with up to eight players in scenario games! From desperate defensive actions as friendly transports escape, to daring assaults on enemy fortifications, each scenario provides a new way to play X-Wing.

This is not a complete game, X-Wing Core Set is required to play.