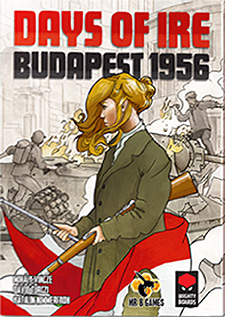 One player plays as the Soviet force, trying to hold the movement back, while a group of 1-3 players play against him as the revolutionaries, driving the movement forward through the seven days between the 23rd and 29th of October 1956.

Otherwise, play cooperatively as a group of 1-4 revolutionaries against an AI Soviet force, with solo and cooperative modes included inside this box.

This game was created to honour the exceptional unity of the Hungarian society during the fights; the memory of the Hungarian citizens - workers, students, intellectuals - who took part in the fights, who got injured or killed, or who had to leave the country after the fall of the revolution; and the aid coming from abroad (from many Polish citizens or with the help of the International Red Cross from different countries).