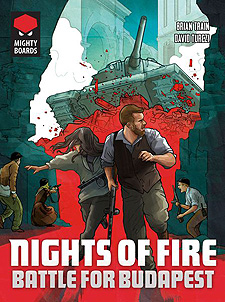 Nights of Fire: Battle for Budapest

After the successful uprising on October 23rd, 1956, freedom and peace seemed at hand. But the hard earned victory was not to last: On November 3rd, 1956 the Soviets arrest the Hungarian delegation negotiating for the country's sovereignty and order their troops to push towards Budapest. During the early hours of the next morning the city wakes up to sounds of tank and artillery fire. The Soviet counter-attack, codenamed Operation Whirlwind, has begun.

One player plays as the Soviet force, advancing into Budapest as a powerful and unstoppable force, while 1-2 other players play as the Hungarian Revolutionaries, slowing down the losing fight while evacuating civilians. Will the Revolutionaries be crushed with an unquestioned Soviet triumph, or will the Soviet commander's reputation be forever tarnished for being held back by the meagre Revolutionary force?

Otherwise, play the dedicated solo and cooperative modes where 1-2 players play against a clever Soviet AI force, both included in this box.