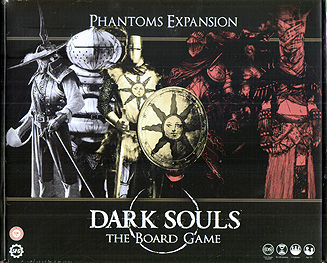 Within the world of Dark Souls reside phantasmal beings of opposed allegiances, The White Phantoms you will meet are ephemeral allies you can call upon for aid in times of greatest need. Beware the Red Phantoms, however. These powerful foes will stop at nothing to destroy the heroes who journey within their realm.

The Phantoms expansion is intended for use with Dark Souls: The Board Game.

The 10 new summon characters come with their own miniatures and behaviour card decks that give each one a unique personality. Summons can be used to assist players during the difficult boss battles of Dark Souls: The Board Game. Some will steadfastly block attacks meant for the party, while others will hang back and sling spells at enemies.

The Phantoms expansion also includes 11 new invader characters that come with their own miniatures, treasure cards, and unique behaviour decks which dictate their actions. Invaders are far less altruistic than summons, however and will harry players' efforts to fight the denizens of Dark Souls. Players who watch and learn the invaders' attack patterns will be able to defeat these phantoms and gain new treasure cards to aid them on their journey.