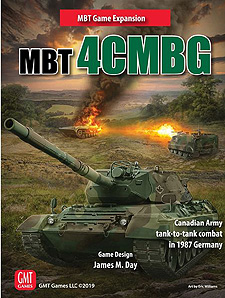 The tanks are poised for action. Their commanders confer one final time. They await YOUR orders.

IMPORTANT NOTE:In order to play this expansion, you will need a copy of the basic MBT game.

4CMBG expands the NATO forces focusing on the Canadian Army of 1987. Included are the Leopard C1, Lynx, M150, M113A1, Ch-136 Kiowa scout helicopter CF-18A/B Hornet aircraft, and a number of other units including infantry and their various anti-tank weapons. The new mapboards include unique terrain features including heavily wooded terrain and an urban-based supply depot Wolf-27.

The playbook includes rules for the new Random Recon system and outlines the Table of organization and Equipment (TO&E) for the 4th Canadian Mechanized Brigade Group as it existed in 1978. The 5 scenarios showcase the Canadian Army and cover the range of action between CENTAG (central Army Group) Canadian and US forces and Soviet GSFG (Group of Soviet Forces Germany) and CFG (Central Group of Forces) units in West Germany.