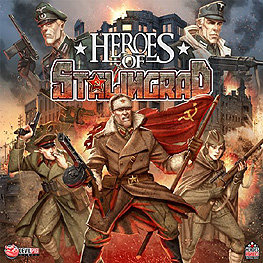 Stalingrad...A name like a requiem. A sad symphony for mortars and machine guns, performed by two different orchestras, each lead by their own unyielding conductor. Actually it was an abhorrent cacophonous concert, the last one that hundreds of thousands, soldiers and civilians alike, would ever attend...
The queen of battles raged between the summer of 1942 all the way to the winter of the following year and was fought in sweltering heat, pouring rain, masses of mud, and tons of snow.
Upon entering what is left of the city, the first thing that hits you, like a punch in the face, is the stench...the utterly foul mix of odors...of death...of fire...of blood...It's omnipresent in the ruins, it lingers around the rubble and debris. And all the while still...men and women are consumed by infernal combat, to gain and hold positions in the higher buildings or silos, to defend a factory...A savage struggle for a garden, a house, or even a room. The relentless clash between "Forever forward!" and "Not one step backwards!"
Both sides display feats of ultimate heroism, for the glory, the motherland, for lost friends or simply to survive this hell...Are you able to lead your heroes to victory?

Heroes of Stalingrad is the second module in the Heroes of Normandie series and the first part of the Eastern Front section. It is played with the repeatedly-awarded Heroes System Tactical Scale. Heroes of Stalingrad adds urban combat as an extra dimension to the games range. Whether you lead the Germans, sent far away from home, to fight the Soviet ogre, or serve Mother Russia at the head of the great patriotic war armies, courage and heroism shall be indispensable!

This box contains everything you need to play Heroes of Stalingrad. You can also combine this game with Heroes of Normandie and its expansions.