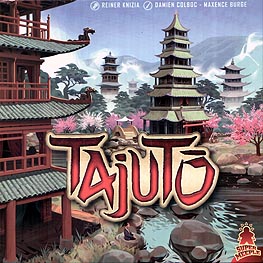 A tactical game of risk-taking, strategy, and tactile recognition.

In 532 Buddhism arrived in Japan and took its place alongside Shintoism, which was the official religion.

Prince Shotoku commissioned Buddhist monks to construct a village endowed with an immense garden, in which 8 pagodas (tajuto) would be erected.

You play as one of the monks, participating in the construction of the pagodas. You must make clever use of your meditation points to gain not only wisdom, but efficacy, all while speculating about which pagodas will be completed.

At game's end, the Prince will pronounce the Buddhist monk who attains the highest level of Spirituality the "Great Guardian of the Sacred Garden of the Eight Pagodas."