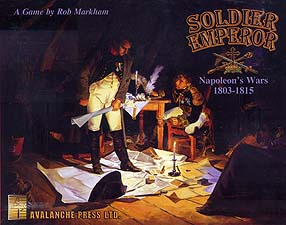 Was £49.99, Now £35.00
From 1803 until 1815, war raged across Europe as Napoleon Bonaparte sought to establish French dominance. Fighting went on for a dozen years before the Allies finally broke French power.

Soldier Emperor is an exciting game for two to seven players, who take the role of the rulers of France, Austria, Spain, Turkey, Britain, Russia, or Prussia. The object of the game is to conquer rich lands for your empire, and stop your rivals from doing the same.

Each player has armies, fleets and leaders to help accomplish this. But mostly, winning depends on the skill and guile of each Soldier Emperor.