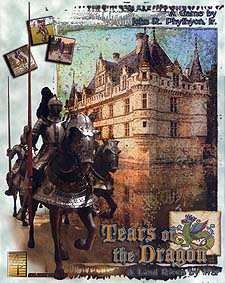 Tears of the Dragon

Was £14.99, Now £7.50
Five hundred years ago, the Princess Erynmil desired a suitor, but she could find no man worthy of her. Her father, furious with her, transformed her into a dragon and imprisoned her on a lonely isle, cursing her to remain there until someone brave, virtuous, and wise enough could free her. The man who could do so would win power beyond his wildest imagination and rule for 100 years. Erynmil cried bitter tears that formed a great salt lake sea as she waited the long centuries for someone to break the spell.

Tears of the Dragon is an exciting two-player game that puts participants in the roles of two great warlords on the cusp of at last freeing the princess form her exile. Players build their armies, fight their opponent, and explore ancient ruins in search of the lost wisdom to win the princess's love.

Each player has foot soldiers, cavalry, leaders, and wizards to help them achieve their aims. Ancient knowledge and powerful magic aid them in their battles against each other and in their quest to staunch the Tears of the Dragon.