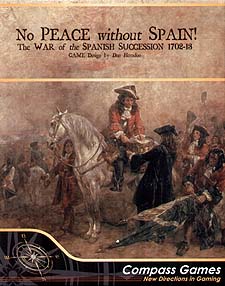 No Peace Without Spain Deluxe Edition

That all fears that the Realms of France and Spain might ever be conjoined in one Person shall be allayed... His Catholic Majesty does here reiterate and reaffirm the abdication of all His rights to the Crown of France.
- Treaty of Utrecht, Article II, 1713

With these words, Philip V, King of Spain and grandson of the Sun King, Louis XIV of France, ended the War of the Spanish Succession by vowing to never attempt the unification of the Spanish and French thrones. "No Peace Without Spain" is a 2-player, card-driven simulation covering the European conflict from 1702 to 1713. One player controls a coalition of pro-Habsburg forces (the "Alliance"), while the other player controls the forces loyal to Philip V (the "Bourbons"). The point-to-point map covers the entire western European theatre, prominently featuring the fortresses which defined war in the "Age of Vauban".

The game allows you to explore many of the what-ifs of this fascinating conflict. Can Marlborough carve his way through the fortress-studded plains of the Spanish Netherlands to the gates of Paris, or will he find an easier route to the French capital? Can Villars rescue the Bourbons' isolated Bavarian allies and push on to Vienna, or does court intrigue keep him away from the fighting at a critical time? Randomly-drawn event cards introduce numerous historical military, political and economic events that influenced the course of the war. Fortresses cover much of the map and a typical game involves many sites, but decisive, bloody battles are destined to be fought, and "Famous Victories" like Blenheim and Ramillies can offer major swings of initiative to the winning side. As the title implies, Spain is a critical theatre - occupation of Madrid is vitally important to both sides and its control will likely determine the ultimate victor.