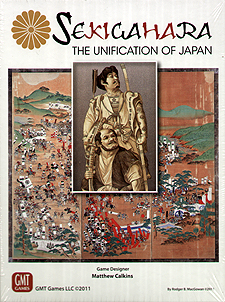 The battle of Sekigahara, fought in 1600 at a crossroads in Japan, unified that nation under the Tokugawa family for more than 250 years.

Sekigahara allows you to re-contest that war as Ishida Mitsunari, defender of a child heir, or Tokugawa Ieyasu, Japan's most powerful daimyo (feudal lord).

The campaign lasted only 7 weeks, during which each side improvised an army and a strategy with what forces their allies could provide. Each leader harboured deep doubts as to the loyalty of his units, and for good reason. Several Daimyo refused to fight; some even turned sides in the midst of battle.

To conquer Japan you must do more than field an army - you must be sure it will follow you into combat. Cultivate the loyalty of your allies and deploy them only when you are confident of their allegiance. Win a battle by gaining a defection from the ranks of your opponent.

Sekigahara is replete with unusual mechanisms:

Game Contents: Review Game There is no review for this game at the moment why not be the first to review it.