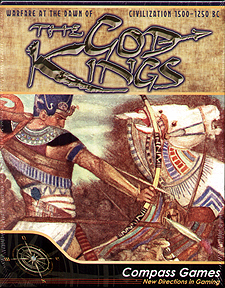 The God Kings is a multi-player, card-driven game spanning three centuries of warfare. The Kingdoms of Egypt, Kassite Babylonia, Hatti, Mitanni and Assyria wage an epic war over centuries in the cradle of civilization, for the right to establish the absolute domination of their God Kind.

Ancient leaders such as Ramesses II, Hatchepsut, Suppiluliuma and Muwatalli II, will rise and fall as they build their empires. Ultimately, only one shall rise. The player who establishes the greatest empire, who can dominate rich tribute-paying provinces, whilst defeating rampaging barbarians and rival nations, shall be THE GOD KING.

This is a card-driven, point-to-point game, playable by 2-4 players. There are numerous scenarios with various playing times from 15 minutes (Battle of Kadesh) to 6 hours for the complete campaign game.