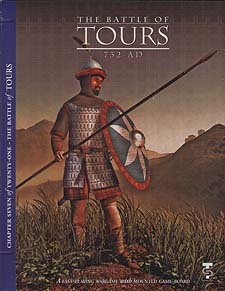 Was £23.99, Now £15.00
The year is 732 AD The Muslims control virtually all of the Iberian peninsula and have crossed the Pyrenees, taking key towns in southwestern France and forming a new province.... and getting involved in local feudal politics.

Scholars still debate on whether the Muslim army was really aiming for more conquest or actually just looking to neutralize a threat (and bring home vast amounts of Christian plunder). One thing is certain. The meeting between Abd ar-Rahman and the Frankish army under Charles (the "Mayor of the Palace" was his title at this time) would start two cycles that lasted for the next 700 years. It marked the end of Islamic expansion and the beginnings of France and the Holy Roman Empire. (Charlemagne was Charles Martel's grandson).

And it all started at Tours... Can you stop Islamic expansion and recover vast wealth? Can you overcome the infidel army and secure the growth for your faith? You decide, as two players command armies which fight very differently from each other.

Different Strokes for Different Armies. "The Battle of Tours" offers the challenge of commanding with very different styles. The Muslims are light and mobile, but fight more by small groups. The Franks are in a transition, between Roman-style "heavy infantry" and the knight of later years. The armies "feel" different to command, and the rules provide for chaos that captures the flavour of the real battle; all in a simple, easy-to-get started format, wherein failure is deadly but success can cause its own problems. You're in command, but no two games will be alike!