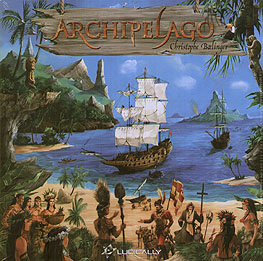 Archipelago recounts the great Age of Discovery, an era of intensive exploration and colonization of the world by European explorers. The game covers the period from 1492 (discovery of the Antilles by Christopher Columbus) to 1797 (colonization of Tahiti).

Each player portrays an explorer and his team commissioned by a European nation to discover, colonize, and exploit islands. The mission is intended to be one of peace: to meet the needs of the local population while providing commercial returns to the continent. The archipelago and its natives must be treated fairly or they will rebel, potentially leading to an all-out war of independence. A balance must be found between expansionism and humanism, between commercial goals and respect for local values, between knowledge sharing and unbridled industrialization. Such balance can only be achieved through each player's commitment to make the archipelago a happy and productive colony. If not, the reckless exploitation of the islands' resources and their inhabitants will ultimately lead to chaos and revolt.

To complicate matters, a separatist or pacifist may bide among the players. One or the other will attempt to use his influence to tilt the balance away from equilibrium and towards his respective goal of chaos and uprising or absolute peace. Are you ready to take on your discovery mission to the archipelago?

You hold in your hands the first semi-cooperative game involving exploration, development, optimization, negotiations, diplomacy... and treachery, for 2 to 5 players, featuring adjustable game length, and where no two games will ever feel alike.

You will compete with other great explorers who each have their own priorities and objective. But you must work together to preserve the balance of the archipelago and avoid a war of independence... or do you?