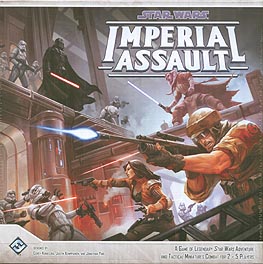 The Fate of the Galaxy Hangs in the Balance...

The Galactic Civil War rages on. After the destruction of the Death Star, the Galactic Empire's power is threatened. Stormtrooper legions surge across the galaxy in an effort to reassert their dominance, while elite Rebel operatives battle them at every turn. Against impossible odds, they engage Imperial forces in the struggle for galactic freedom.

Imperial Assault is an epic adventure board game in the Star Wars universe for 2-5 players. The mighty Imperial army and a cadre of deadly bounty hunters face off against daring Rebel heroes in a series of tactical combat missions. Iconic characters like Darth Vader and Han Solo raise the stakes in the epic campaign. Each battle escalates towards a climactic final showdown between the Galactic Empire and the Rebel Alliance.

With 34 plastic figures, over 200 cards, 0ver 50 modular map tiles and much more, Imperial Assault is your chance to change the fate of a galaxy far, far away.