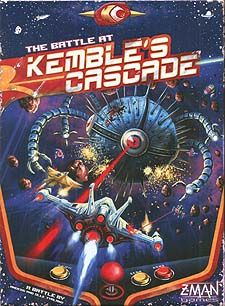 The Battle at Kemble's Cascade

The year is 3868 A.D. and you have been sent to the Cascade by the Federation Council of your Empire, to uncover the myths and bring back technology yet unknown. This will once and for all give you the glory that you so well deserve.

In Kemble's Cascade, you never know what's coming up, and you can never see what's far behind you. The game is played out on a scrolling space backdrop that continuously reveals new threats. Each round, the last row of Space cards disappears from your view and a new row appears at the top edge of the galaxy.

An ever-changing space backdrop!
Different level packs containing Tunnels, Wormholes, Fighters, and much more can be mixed together for infinite playing options. no space adventure will ever be the same as the last!

Your ship, your rules!
Many different upgrade strategies exist for customising your ships. Build the toughest ship by buying and upgrading weapons; modify your engines to move faster; improve your shields to protect yourself from enemies and more!

Trust no one!
In addition to the hostile space environment, you must also be wary of the other ships that will not hesitate to shoot at you in PvP battles!