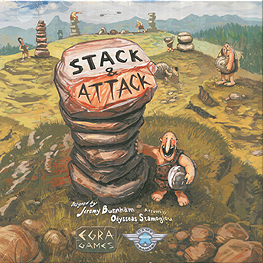 It's the middle of the Stone Age; food is sparse, rain falls fromkt he sky when it is least wanted, adn conflict stews among the council of the elders. In an effort to better the lives of your people you have turned to worship. However, you're not the only one with that idea!

Neighbouring tribes have started constructing monuments of their own, in an effort to turn the favour of the gods their direction. The race to the top has begun!

In "Stack & Attack", you take on the role of a Stone Age Neanderthal who worships the gods of Earth, Sun and Wind by stacking stone towers to the sky. Each turn you are presented with three options:

With the right strategy and a little bit of luck perhaps you'll be able to construct a tower that earns the favour of the gods!