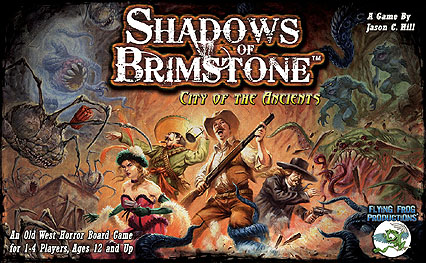 Shadows of Brimstone: City of the Ancients

It is the mid-1880s in the Southwest United States, and the small mining town of Brimstone has found Dark Stone up in the hills; a new precious mineral with magical properties, rarer than gold... and more dangerous! Digging for it greedily, prospectors came from all around, not knowing the consequences of their actions until it was too late. In a flash, the town of Brimstone was consumed, the epicentre of a cataclysmic magical explosion, opening up portals to other worlds down in the mines and unleashing a great darkness to spread across the land!

Now hordes of demons pour from the mines to ravage the countryside, and the sky grows black with swarms of nightmarish creatures descending on unwary travellers in the night! While most flee in terror, some heroic individuals come forward to help hold back the darkness, fighting their way into the mines to seal these gateways, and maybe find a fortune of their own along the way.

Shadows of Brimstone is a fast-paced, cooperative, dungeon-crawl board game set in the Old West, and mixed with Unspeakable Horror! Each player creates a character, taking on the role of a classic Western Hero Archetype, such as a bandido, US Marshal, Gunslinger, or Saloon Girl. Forming a posse of Heroes, the players take their characters down into the mines in the foothills surrounding the demonically overrun town of Brimstone. The Heroes can embark on a variety of different missions, from finding and sealing a gateway to another world, to rescuing a farmer's son who was hauled off in the night by a horrible creature. The Heroes explore a dynamically-generated mine, overcoming dangerous encounters and fighting savage creatures, while collecting up useful Gear and ancient Artifacts to help them during their adventures. Heroes can even find portals to other worlds, stepping through to continue their adventure on the other side.

Hero characters can be kept from game to game in a campaign system, earning experience and going up in levels to increase their skills and gain new abilities. The Heroes can also visit local Frontier Towns between adventures, spending their hard-earned loot and re-supplying for the next mission. So load up yer' six shooter, throw on yer' hat and poncho, and gather the posse, the darkness is coming and all hell's about to break loose... in the Shadows of Brimstone!