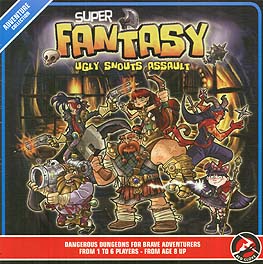 Super Fantasy is an adventure game where 1 to 6 players take on the roles of heroes with fantastic powers, seeking their ruthless vengeance against the terrible Ugly Snouts troops. Emerged from the underground, these horrible creatures have wronged each one of the great heroes and now it is time for a showdown.

Will you take the role of mighty Barka, whose mother has been kidnapped, or Yang-Ping the Shadowmaster, who was beaten in a contest for the best cake by Zur'ill, Warlock of the Greeny-Stinky-Pitcher, Great Alchemist and Keeper of the Gargantuamask?

Whoever you choose, it is time to face the Ugly Snouts! Super Fantasy is a dungeon crawler with 4 player modes: Solo, Co-op, Master, and Arena. The ridiculous and ironic background, the easy to learn rules, and its hack'n'slash features make this game unique and innovative for its genre. Prepare for the final battle!