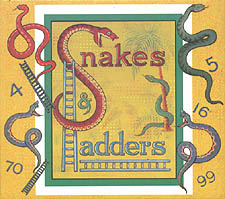 
The game of Snakes and Ladder originated in India as a game based on morality called Vaikuntapaali or Paramapada Sopanam (the ladder to salvation). The game made its way to Britain in the late 1800s as people travelled around the British Empire at the time.

It seems that the original Indian version of the game dates back as far as the 16th century. The ladders represented virtues such as generosity, faith, humility etc., and the snakes represented vices such as anger, murder, theft etc.

Snakes and Ladder has been enjoyed by children for many, many years. This version is based on an original game dating from the 1920s.