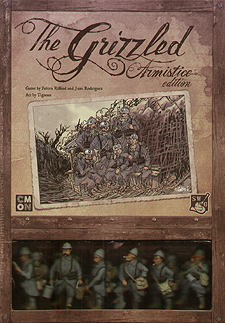 The announcement of war has devastated families, shattered communities, and divided the world. An inseparable group of friends has promised to both remain together, and come home together. However, each passing day only brings more bad news. The trenches have become the group's new home. But despite everything, they have remained united. And now, rumours of an Armistice give them hope...Will these brave friends survive the devastating effects of the Great War?

The Grizzled: Armistice transports you into the daily lives of a group of Grizzled soldiers trying to survive in the trenches. this special edition provides a new immersive Campaign Mode, made of a series of unique and intense Chapters where you must confront the major events of World War I. However, the 211 cards included in Armistice allow you to play both the original version of The Grizzled, and the At Your Orders! expansion, with or without the new features introduced in Armistice.

The road to victory may seem difficult, but don't give up.
Support your friends, face your fears, and survive until the Armistice!