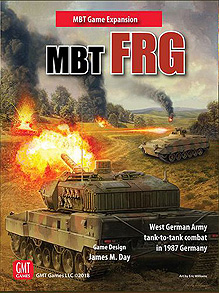 The tanks are poised for action.
Their commanders confer one final time.
They await YOUR orders.

IMPORTANT NOTE: In order to play this Expansion, you will need a copy of the basic MBT game.

The playbook outlines the Table of Organization and Equipment (TO&E) for the West German mechanized forces of the period. The 10 scenarios showcase the German Army and cover the range of action between NORTHAG (Northern Army Group) and CENTAG (Central Army Group) German forces and Soviet GSFG (Group of Soviet Forces Germany) and Soviet CGF (Central Group Forces) forces.