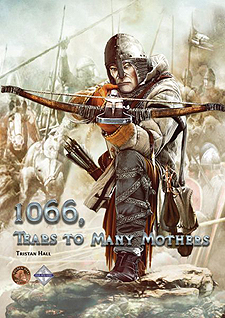 A promise has been made and broken, an evil omen is in the sky, a crown is at stake, and history is about to be made. It is April 1066 and Harold Godwinson, King of England, faces a deadly challenge from Duke William of Normandy. William believes that Harold has broken his solemn oath by claiming the English crown, and the matter must be settled by force, in a battle the likes of which the world has never seen...

1066. Tears of Many Mothers is an asymmetrical, competitive, and non-collectable card game of tactics and war. From award-winning game designer Trista Hall, this 1-2 player game recreates the momentous events of that seismic year in British history. Each player, as either Normans or Saxons, muster troops and resources to overcome the various obstacles in their way before the two armies clash on the battlefield at Hastings.