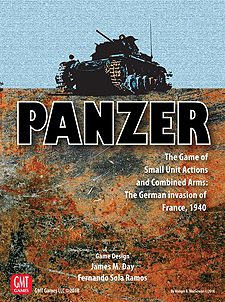 The tanks prepare for action.
The commanders confer one final time.
They await YOUR orders.

IMPORTANT NOTE: In order to play this expansion, you will need a copy of the basic Panzer game; ownership of Panzer Expansions Nr1, Nr2, or Nr3 is not required.

Panzer Expansion Nr4 opens the action on the Western Front with the German invasion of France.

The Solitaire rules enable players to test their tactics as either the French or Germans while engaging a situational-based AI system generating challenging responses. The Leader rules add a powerful new dynamic. They represent individuals of various ranks and skills that can influence gameplay in a number of unique ways. To cover all fronts, French, German, Soviet, British, and US leader counters are included.

Included are five versions of the French "H" and "R" series tanks, the Char B1-bis, S-35, AMD 35, infantry, anti-tank guns, two aircraft, and many others. The Germans are also well covered with the Panzer IB, IIC, IIIF, IVD, 35(t), and STuG IIIA, SPWs, PSWs, one new aircraft, and more.

The twelve scenarios include two historical, eight historical-based, and two solitaire scenarios that cover a wide range of action between French and German units, including two clashes between French mobile units including the Char B1-bis heavy tank, and elements of the German Infanterie-Regiment Grosdeutschland at Stonne.

The detailed TO&E book outlines five French divisions, including the DLM - Division Legere Mechanique and the DCR - Division Cuirasse du Reserve, and three German divisions plus Infanterie-Regiment Grosdeutschland as it was structured in May, 1940.