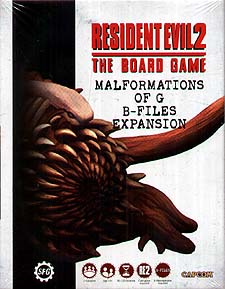 Resident Evil 2: The Board Game - Malformations of G B-Files Expansion

Although the first group of survivors were able to overcome the ferocious Birkin Stage Three mutation and escape, their adversary was not so easily defeated. Lurking within the darkness and regaining its strength, the creature was merely biding its time until the second group of survivors arrived, before resuming its deadly assault. Can such a monstrous foe ever be truly defeated?

It's time to step up and escape the nightmare once and for all!

A copy of Resident Evil 2: The Board Game and the B-Files expansion are required in order to play with this expansion.