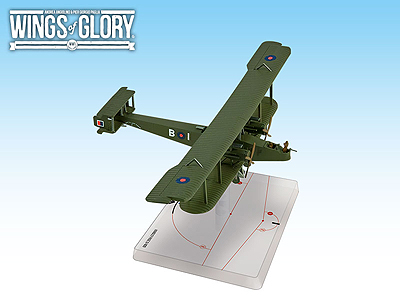 During World War I, aviation technology was incredibly fast, from the earliest combat machines to the development of massive weapons of destruction, veritable "Giants of the Sky," used to bomb the enemy forces and launch assaults deep into their homeland.

The Handley Page 0/400 was the most important RAF heavy bomber by the end of the war. Built to an immensely large size, the 0/400 had a wingspan of over 100 feet; with its powerful engines and massive structure, it was able to carry a bomb load up to 2,000 pounds. While entering service late in the conflict, more than 500 were built, and they were used in countless missions to bring destruction over the enemy lines and deep into German territory - several times successfully bombing important industries zones, hampering the development of the terrible chemical weapons used by the German army.

This WWI Wings of Glory Special Pack includes a ready-to-play model, painted and assembled, to use together with any other WWI Wings of Glory game product. The box includes all you need to play with the airplane: a special base with gaming stats, a variable altitude flying stand, airplane card, management card, a deck of manoeuvre cards, rules, counters, and a double-sided 68x98cm poster map of London to use in your scenarios.